Sailing during the pandemic: a major challenge for Joël and his Selene 66 Jade.

It was in 2013 that the New Caledonian Joël left his sailboat for this authentic trawler 22 meters long: the Selene 66. It must be said that the boat designed by Howard Chen has everything to please sailing enthusiasts offshore with its flawless reliability, without great comfort and its range estimated at almost 6000 miles.

A godsend for the sailor who wanted to continue to sail the Pacific aboard a ship capable of facing all sailing conditions, even the most complex.

It is therefore after having undertaken various journeys including a South-North ascent of the Pacific from the New Zealand to Japan , after scouring the Japanese islands before reaching Valdivostok and the Aleutian Islands that Joël and his crew wanted to return to their first love: Alaska and the American Northwest.

Returning there each season from May to October, the Selene 66 Jade has set out to discover British Columbia as well as the American Puget Sound or even remote places in Alaska where calm and he absence of wind are perfect conditions for sailing aboard a trawler.

In June 2021, Joël decided to go on a cruise again, heading for Alaska!

A navigation that was not easy since the global health situation has upset the journey of our now famous "Jade", the Selene 66 adventurer par excellence. Discover the crazy adventure of the trawler and its owner. An eventful journey in perspective...

An eventful navigation in times of global pandemic

While the world is still under glass because of the pandemic, the trawler Selene 66 "Jade" was still able to reach San Juan Island for a peaceful wintering at the US-Canada border . As soon as her wintering was over, the "Jade" had plans to set sail for Alaska.

A well-established navigation plan which has unfortunately been thwarted by the health situation and entry restrictions in some countries.

From Friday Harbor on San Juan Island to its final destination in Alaska, the navigation of the Selene 66 "Jade" was not easy and almost never reach his purpose. A journey told by Joël Marc, captain of the trawler embarked on this crazy ocean adventure, in the nautical magazine Neptune.

A sudden program change due to the pandemic

After dewintering the boat for several months, the time has come to go to Alaska, the captain's favorite annual trip. Although his usual teammates and his family were unable to come by his side, Joël Marc still completed his trip by going to this territory that he knows well and that he particularly likes.

With the help of Mark, a customs officer in professional satnd-by during Covid-19, the seasoned adventurer prepared the ascent of the Selene 66 “Jade” to Ketchikan, the gateway to Alaska.

However, since the Canadian border was hermetically closed due to the pandemic, the beginning of the pitfalls for the famous traveling trawler would begin with a navigation program that was very different from the one initially developed by this boating and navigation enthusiast.

An electronic failure on board: the first setback in Jade's navigation - Selene 66

When restarting the boat, a first major problem appeared: an electronic failure of the main Simrad system (GB 60) and its independent backup.

Despite its proven reliability, the Selene's on-board system seems to have suffered a total absence of use during the few months of wintering. Far from being discouraged, Joël and his Selene 66 then took the road to Gig Harbor where Mark Tilden, computer specialist and electronics specialist, and his friend were, who were both to accompany Jade's new journey to Alaska.

It is alone and equipped with an old second-hand iPad equipped with Navitronics maps that Joël Marc finally arrives ins this place in Washington State, near Seattle. The bay, sheltered from the bad weather, brought the Selene 66 to port.

Once there, Mark Tilden makes a definitive diagnosis: the device as well as the backup allowing communication by Iridium satellite to obtain the weather files are out of order.

In order not to stop Jade in her travel business in Alaska, the computer scientist therefore set up a backup system using a NUC, a compact computer that provides access to electronic cartography as well as a satellite internet communication system.

Despite this setback, the Selene 66 can finally resume its navigation objective towards Alaska, more confident than ever.

A long navigation in the Canadian archipelago without landing

As the global pandemic changes the habits of everyone ashore, yachtsmen and navigators are not spared!

In June 2021, the date of this expedition, it was possible for a pleasure boat coming from the State of Washington and wishing to reach Alaska to transit through British Columbia, which is a Canadian territory. However, this route possibility is subject to an agreement in both countries and to special restrictions.

Either the ship crosses in one go without stopping in Canada, which means navigating at night in a rather dangerous archipelago, or the ship makes a anchorage to spend the night without ever disembarking following a pre-established route.

This is the solution that was chosen for Jade's journey, which then had to avoid a stop at the border post in the early morning for a regular inspection.

Having previously taken all the necessary steps for the passage of the boat in this special sanitary context, the owner of the Selene 66 trawler hoisted theyellow flag for mandatory quarantine and the Canadian flag, heading for customs. of Friday Harbor.

Once arrived, the crew is invited to dock in the port of Sidney, near Victoria in British Columbia. The passage formalities are done, an official number to be displayed is highlighted on the Selene 66 in case of control and the trawler leaves for 7 days of navigation and 700 diurnal miles through the Canadian archipelago without ever setting foot on the ground.

At an average of 7-8 knots,the Selene 66 is sailing serenely. The trawler thus allows Joël and his friends to cover long stages while taking advantage of very low fuel consumption for a boat of this size.

Mark took advantage of this long journey to solve the problem of the Simrad system which, after a cleaning of useless files, was able to regain its full capacity. The Selene 66's journey therefore continues peacefully...until the next pitfall.

An impossible border crossing in the United States during Covid

After 7 days of navigation and finally arriving in the Prince Rupert region at the Canadian border with Alaska, the captain of Jade decides to contact the American customs at the port of Ketchikan, thinking he is reaching the goal of his navigation objective .

Terrible disappointment on the phone: "The border is closed, you cannot enter US waters."

Despite negotiations, nothing worked, the American customs are formal, Jade will not be able to enter American territory. The team on board then decides to recontact mark, the Friday Harbor customs officer, hoping to obtain help and information. The latter reassures the crew by assuring that there is probably a misunderstanding and that everything will surely work out on the spot in Ketchikan.

Unfortunately, arrived on site, impossible to set foot on land, "absolute defense to leave the edge". A customs officer solemnly states the impossibility for the New Caledonian skipper to complete his voyage, he summons him to return to Canada, leaving however the possibility to Mark and Joel, both American citizens to return to the USA.

Stunned by this news, the crew remains aboard the Selene 66 at Canadian customs in Prince Rupert, unsure of being able to continue the adventure.

Following this misadventure, Mark and his friend had to go back to Seattle, leaving Joël to turn back to a Canadian pontoon assigned by customs.

The next day, two new customs officers arrive at the boat. They ask the captain to join Sidney and leave the country within 3 days of his arrival. Jumping from flea to flea, "Jade" and her captain finally end up having good news coming straight from Friday Harbor: "Joel, you are welcome to Friday Harbor where we will provide you with your Cruising Permit for 1 year."

The Cruising Permit, this precious sesame to continue the journey!

Despite the expense of a 1,400-mile interest-free round trip, the Selene 66 sails back to her long-awaited final destination: Alaska. After 6 days at a rate of 80 miles per day, "Jade" reached its goal. By recounting his journey to customs officers surprised to see him return, the New Caledonian adventurer owner finally manages to reach Alaska. 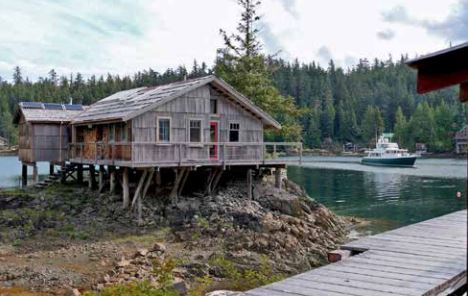 The solidity of Selene 66 hailed for this journey between Canada and the USA!

After this nightmare episode, the owner of the Selene 66 nevertheless wanted to take the positive from this experience.

Beyond the difficulty of traveling and navigating in times of global pandemic, the trawler 66 Jade has demonstrated its reliability. Whether in terms of mechanics, electronics, manoeuvrability, mooring safety or general ergonomics, the Selene 66 has, once again, kept all its promises.

Aboard this 22-meter vessel, the captain was able to cover a distance of 8000 miles alone in a maze of narrow fjords, sounds (straits subject to strong currents) and rapids dangerous without ever losing confidence in his boat.

Bought second-hand in 2013 in Auckland, Jade is a particularly sharp Selene for long sailings. In addition to its basic qualities, the trawler has benefited from various improvements such as a reinforcement of the mooring gear (120 m of chains on board with a 13 mm link) coupled with a good Manson anchor, < strong>13 solar panels on the rooftop to support the 27 kVA Khler generator, removable double glazing for example.

All these modifications allow the Selene 66 to be a true international reference on the trawler market today!

Are you looking for a Selene to travel the seas and oceans of the world with confidence? Exclusive importer of Selene boats in France, Italy, Spain, and the United Kingdom, Trawlers & Yachting invites you to discover the range available in agencies at Mandelieu-la-Napoule.